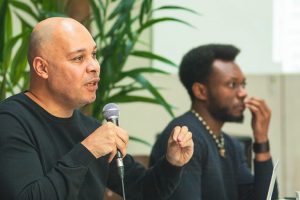 “What becomes possible after the poet hijacks the terms of justice and opens up their potential for re-signification?” — Denise Ferreira da Silva

AntiColonial Records will include a three-day programme including working groups, film screenings, presentations and discussions revolving around the question of social justice born out of the postcolonial situation. The encounter is set up to facilitate collaborative explorations of the potential of the creative work to disrupt ingrained ideas and representations through affecting the senses and imagination. It forms a continuation of discussions started during the “Black Lens” seminar held at Khiasma and La Colonie last March in Paris.

AntiColonial Records takes place in the context of the five-year research program, AntiColonial Methods, designed by the Critical + Creative Social Justice Studies Excellence Research Cluster (Critical Racial and Anti-Colonial Studies Thematic Network, Social Justice Institute, UBC). This broader project gears to gather artists, activists, curators and academics whose practices raise the question/ing of existing formulations of universal justice by attending to the reverberations of colonial and racial violence – such as the current refugee crisis and the postcolonial conflicts behind them – in Europe and the postcolonies in Africa, the Middle East, the Americas, Asia, and the Pacific. The encounter provides the space for interrogations of the onto/epistemological grounds of the colonial (violent-juridical) and racial (formal-symbolic) appropriation of land and body. The objective of the program is to contribute to the assemblage of research-based critical and compositional tools apt to delineate a transformative theory of justice.

The program will be open to the public on two separate occasions:

October 25th, 7 pm – Screening and lecture
Odyssey, a film by Sabine Groenewegen (2018, 64 min) Two undefined intelligences are intercepting earthly footage of humans living in an area known as the Low Lands. The researchers exchange their findings through a visual feed, in an attempt to understand the occurrence of extraordinary apparitions. Through a combination of found footage, sci-fi and poetry, Odyssey interrogates the visual and trans-generational elements of coloniality and its rhetoric. Defying genres, the film evokes questions about the stories we are told and our possibilities to disrupt them. Followed by a poetic lecture by Jörgen « Unom » Gario (15 min) and a conversation with the audience.
Friday 26th, 8pm – Public session
The partecipants of each of the three working groups part of the seminar will share first attempts at mapping anticolonial methods:
Group A : Records / Archives, Technologies of the Eye, the Sonic
Group B : The Global Condition, Raw Materialism, Inscriptions, Extractivism, Transplants
Group C : Collective practices, Body, Voice, Language / Translation

With the support of the PERSPEKTIVE fund for contemporary art and architecture (an initiative of the Institut français’s Bureau des arts plastiques, supported by the French Ministry of Culture and the Goethe Institut).

We are excited to announce that the Fourth International Conference of the Critical Ethnic Studies Association will take place in Vancouver, CA at the University of British Columbia. This conference, entitled,

is hosted by the Critical Racial and Anti-Colonial Studies (CRACS) Research Network at the Institute for Gender, Race, Sexuality and Social Justice at UBC.

Please note: the deadline to apply has been extended to December 4th, 2017.

Visit www.criticalethnicstudies.org for more information about the association and its mandate! 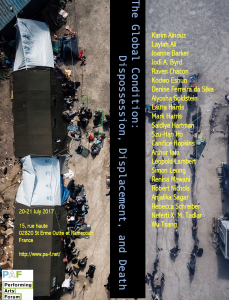 The global moment is confirmation of the escalating cycle of violence manifested in displacement, dispossession and ultimately death. Daily we witness and are affected by the exodus of refugees from Syria – of a magnitude not seen since World War 2 and the exclusion of those same refugees at the borders of European nations and their internment in places like ‘the jungle’ in Calais. Daily there are accounts of the black and brown bodies that are being killed by police, militia and governments in the US, Brazil and elsewhere. And always this is played out in the context of continuing global colonial violence against racial and ethnic minorities and Indigenous peoples.

The workshop brought ogether artists, filmmakers, architects, curators, performers, and academics around the theme of “The Global Condition: Dispossession, Displacement, and Death.” Participants will meet and discuss pre-circulated writing and project proposals, as well as stage performances and produce artwork and installations, that take the workshop theme as a point of departure.  We don’t as yet have funding to offer to cover participant travel.

It provided a context for exchange and dialog beyond the typical institutional and disciplinary boundaries of cultural and academic work that engages the contemporary politics of dispossession, displacement, and ultimately premature death. We intend the workshop “outcomes” to include written essays (single authored and collaborative pieces), documentation of performances, installations, and multimedia artwork, poetry, and transcribed collective conversations and interviews.

During  two days  workshop participants  reflected upon the displacement, dispossession and death that attends the current global moment. Without making a prescriptive demand for the format some of the questions that might be engaged with include: How do we understand the violence that attends these moments? What ethical responses can be made to the violence? Is it possible to dismantle the architecture of oppression in any of its myriad iterations and forms including Empire, capitalism, neo-liberalism and settler colonialism? While the workshop may include presentations of a more traditional, text-based nature it is intended that this space will also engage with responses from a range of other disciplines. Participants are encouraged to think of their involvement in the form of art installations, music, interpretive dance to name but a few possibilities. The ultimate objective is to foster dialogue across disciplines and modes of thinking to engage with the questions that flow from the workshop title.

The Critical Racial and Anti-Colonial Studies (CRACS) Research Network at the Social Justice Institute is excited to host a mini-conference featuring members* of the Anti-Colonial Machine collective. As a space for conversing about, around, and in spite of recent political, economic, and social developments, the program invites other members of the UBC and broader community to learn, engage in discussion, and reflect on crucial conceptual and political issues pertaining to collective, intersectional histories and futures of colonialism. 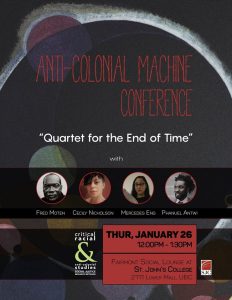 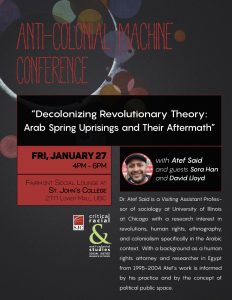 Video for Quartet for the End of Time available here:

The following excerpts were provided by The Capilano Review. Click here to view the latest issue of the magazine and to subscribe.

Cecily Nicholson–Before my book on New York, I was a painter